Many gawped and some were momentarily dazzled when Kim Kardashian tried to break the internet with her shiny buttocks, but most of us were only temporarily transfixed. These are troubled times, even if you are a celebrity with a flashy bottom or a billionaire with a Lamborghini, and we are probably to blame for most of our misfortunes. Perhaps someone should just flick the “off” switch to avoid us all sinking to the level of the lowest common denominator.

“Torches and Pitchforks”, the opener on Cracker’s new double album, Berkeley to Bakersfield, suggests we may need a revolution. Band leader David Lowery has been making some strong points around artists rights in the digital world for a number of years (see his blog, the Trichordist), but here he universalises the struggle, gently threatening to take back power from the people in the mansions, to fight the goons, lawyers, and Pinkertons. The backdrop of the labour movement makes for a surprisingly political start for a Cracker album; you could argue this type of material is more usually reserved for sister band Camper Van Beethoven.

Still, it’s interesting enough, and the overtly political lyrics are stylistically focussed to match the notion of place; Berkeley to Bakersfield is a double album split into the sides of “Berkeley” — with the original Cracker line-up of Lowery, Hickman, Faragher and Urbano plus others — versus “Bakersfield” — made up of Lowery, Hickman, Howard Wheatley, and again additional supporting musicians.

For non-Americans or those who struggle with geography, Berkeley and Bakersfield are Californian cities just shy of five hours apart from one another by car. By reputation, Berkeley is a strong-hold for liberalism and is greatly identified with the civic unrest that characterized the late ’60s; the hip Telegraph Avenue, recently enshrined in a funky book of the same name by Michael Chabon, ends at Berkeley’s University of California. Bakersfield is an altogether different kettle of fish: it’s inland as opposed to near the coast, with lots of cows, and significantly more conservative. (Bakersfield, according to some research, makes the list of the top ten most conservative cities in the United States. The same research has Berkeley as the fourth most liberal city.) The two sides of the album reflect these two cities and their inhabitants: tougher, more hard-edged garage rock for Berkeley compared to softer, country twang for Bakersfield. We’re talking the Flamin’ Groovies against Merle Haggard in a fight to the death.

An immediate comparison for the concept could be made to Chuck Prophet’s Temple Beautiful, a zippy but successful run-through the streets of Fog City. Although there’s a similarity in approach, as a double album Berkeley to Bakersfield is purposefully more wide-ranging, and whilst Temple Beautiful saw San Francisco in mythological terms, Berkeley to Bakersfield seems more down-at-heel.

It should also be noted that over the last five years, the material produced by the stable of bands under Lowery’s leadership (and solo) has been particularly proliferate, promiscuous, prodigious. In addition to this work, Lowery teaches as a lecturer and, as already mentioned, has a consistently high profile in the media as a champion of artists rights. As such, it could almost be said that Lowery has become the voice of a generation; however, it seems likely he would dismiss this title as meaningless blabber.

The “Berkeley” side track “March of the Billionaires” continues a determined political stance. It’s an angry song with a striking melody line and thorough chords, railing against the tyranny of the new super-rich. As a listener it’s difficult not to feel at least slightly cross as we’re told to “get into line / your poverty brings us all progress / stop talking back / we’re richer and smarter than you”. The rootsy backing vocal from Thayer Sarrano keeps the song from self-righteousness, and many of the lines could apply to a musician’s fight with the record industry: “we’ll take what you’ve got and we’ll sell it back to you”.

“Beautiful” returns to more traditional territory for Cracker: the alternative scene. Coffee shops, Telegraph Avenue, Rasputin Records, People’s Park, and Doc Martin boots are all referenced with a mix of infectious enthusiasm and distinct punk rock attitude, featuring some sharp guitar work by Hickman. “El Comandante” takes the well-worn story of a father’s disapproval of a daughter’s boyfriend, but skews things so that the disapproval is due to a solitary bag of weed. The track has some great background harmony vocals which are often a feature of Cracker’s work. Both “Beautiful” and “El Comandante” are centered on relationships, but the detailed writing is such that the characters could only live in California.

“El Cerrito” returns to the State in a more focused way, extolling the virtues of the city in Contra Costa County, part of the San Francisco Bay Area. The song is upbeat and fun, kept engaging by the tension created through the city’s rivalry with San Francisco. Again, Lowery’s lyrics focus on the underground scene, which we’re told is fast disappearing in San Francisco. It’s clever writing, and should be much appreciated by El Cerrito residents. “Reaction” is also in-your-face punk rock; humorously, despite the singer seeing his girlfriend with her new boyfriend at the very start of the song, he goes on to tell her repeatedly that “you know it’s not my problem / if you’re not over me”. “You Got Yourself Into This” continues in the same attitude, with an awesome and technical guitar riff.

Whilst Berkeley has an obvious theme, there’s a feeling of movement and diversity on the album, and the ideas are put forward in such a way as to make this album relevant to modern life and not just California. “Life In The Big City” has a cartoonish quality due to the sliding instrumentation and backing vocals which well evoke the frenetic pace of a city. Lowery cross-refers back to the selfishness set out in the earlier political songs, but it’s now in a personal context when “what’s good for me/ is good for you”. The lyrics seem almost spat out, detailing the hedonism of jet planes, secret bank accounts, tax breaks, and dominatrixes to reveal an underlying hypocrisy: “I feel better when I get dirty / but see you in the Church on Sunday”. By the time we get to “Waited My Whole Life” at the end of Berkeley, there’s been a marked shift in tone: social unrest has switched to the personal and here, laid-back soul, as Lowery masterfully switches his singing style to suit. It’s an uplifting and inspired close to the first suite.

Bakersfield takes on an altogether different style again; we’re headed to the country, and it’s entirely understandable why these songs were grouped and recorded separately. Johnny Hickman takes lead vocal on the almost traditional “California Country Boy”. Some might not associate California with pedal steel, but it’s here in all its glory (played by Matt “Pistol” Stoessel). The lyrical intention of the song is clear: to debunk the stereotypes about the Golden State, as there are places where there are no palm trees or movie stars but instead miles of farmland. Hickman also sings up a storm for the romp through “The San Bernardino Boy”, a high-spirited good-time.

Overall, however, the tone is more downbeat for this part of the album. “Almond Grove” is a bedraggled trawl through cotton fields with a character who, having fallen in with the narco set, ends up as a junkie living in his brother’s car, and the repetitive banjo pattern playing behind the singer seems to provide the only security. “King Of Bakersfield” describes a slightly more affluent world, although any pleasure seems through simplicity: beer and motorcycles. Music is one of the few redemptions in “Tonight I Cross The Border”, with melancholic piano setting a desolate, drifting atmosphere. “I’m Sorry Baby” and “When You Come Down” are both sorrowful and lowdown, detailing difficult relationships; strikingly, Lowery successfully incorporates a defiant “we are estranged” into the chorus lyric for “I’m Sorry Baby”, and in both these songs the vocal is charmingly deliberate.

“Get On Down The Road” moves the tempo up again to the more raucous, an almost twangy re-interpretation of “You Got Yourself Into This” from the Berkeley side. However, uncompromising positions are taken, so it’s far from an optimistic song.

Bakersfield draws to a close with “Where Have Those Days Gone”, a return to a song from Cracker’s under-promoted Greenland. This time, the recording is less frenetic, and a little more at peace. It benefits from further attention, with contemplation about the past more suited to a quieter setting. And to avoid now sitting on the figurative farmer’s fence, it may also be the case that listeners naturally gravitate more towards Berkeley than Bakersfield; the adventurous escapades in the former just seem like a lot more fun – complicated maybe, but exciting nonetheless. However many will still appreciate the virtues of some Bakersfield downtime. What both sides have in common (as well as California) is a sense of defiance, and perhaps that can be some kind of conclusion to Cracker’s search for meaning and identity across the state.

Bureaucrats and advertisers take note: this album contains anthems which could market your cities or products, but the licensing deals are likely to be savagely thrashed out. Cracker is not the kind of band to sell out easily. 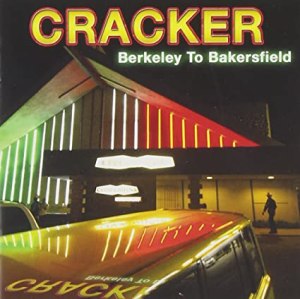