Various Artists: Woody Guthrie at 100! Live at the Kennedy Center

Woody Guthrie would be a pop star shaking his booty on MTV if he were here today. I doubt he would have been able to resist the allure of getting his songs beamed into a hundred million homes. He’d start out as a glam pop poet, friends with Bowie and T. Rex; change direction to dance music in the ‘80s (he got heavily into the rave scene for a while, and had to be pulled out of a bad situation by one of his ex-wives); recover in rehab and relaunch his career as a veteran rock-star, playing stadiums and football pitches. His duet with Beyoncé would be a big hit, and a number of coffee-table photography books of Guthrie at home/on tour were published. He was briefly associated with the Occupy Movement, and finally was popularly admitted as Governor of New Jersey. He was named after Woodrow Wilson; his life went full circle.

Of course this is conjecture, imagination; but these days Guthrie is rightly revered as one of the great icons of modern music. He didn’t create folk music, but it would have been a poorer place without him. Interest in Guthrie has rallied over the last 20 years or so, probably starting with Folkways: A Vision Shared back in 1988. Since then, archives have opened and numerous other projects have worked well, most particularly Mermaid Avenue and Man in the Sand. The reality is it’s like Guthrie’s still here with us, and I’m certain that’s the way he’d like it.

Woody Guthrie at 100! Live At The Kennedy Center is the recording of a celebratory concert featuring an array of artists, the climax of a year of Guthrie centennial birthday events. It demonstrates why Guthrie would have been a pop star, and why he was not just a folk singer who’d appeal to the Morris Dancing posse; his songs in actuality are modern and varied, and can be interpreted through country and blues to pop and rock. There are songs for kids (Donovan sings “Riding In My Car”), a Dylan-esque delivery of “Ramblin’ Reckless Hobo” by Joel Rafael, and the hillbilly romp of “Hard Travelin’ (Jimmy LaFave). Roseanne Cash and John Leventhal contribute an emotional “I Ain’t Got No Home” and a straight storyteller’s version of “Pretty Boy Floyd”. If gospel’s your thing, Sweet Honey in the Rock provide an impassioned rendition of “I’ve Got To Know”.

Two of Guthrie’s most famous songs, “This Land Is Your Land” and “This Train Is Bound For Glory”, are rightly here community efforts–they are big songs, and suitable for a full cast. Ramblin’ Jack Elliott, a contemporary of Guthrie’s, artfully renders “1913 Massacre”, reminding us Guthrie’s music was didactic, but you could still enjoy yourself whilst learning a lesson from the experience of others. John Mellencamp makes the point that he likes “what Woody stood for” before his take on Do Re Mi. Purists will appreciate the bluegrass interpretation of “So Long, It’s Been Good To Know Yuh” by the Del McCoury Band and “Union Maid” by Old Crow Medecine Show. Jackson Brown adds West Coast spin to “You Know The Night” and Ani DiFranco and Ry Cooder create just the right amount of Mexican light for “Deportee”. Guthrie’s guitar proudly declared that it killed fascists, and Tom Morello’s “Ease My Revolutionary Mind” excellently displays a potent mix of the personal and political. Judy Collins and Lucinda Williams both show Guthrie’s not just for the boys with “Pasture of Plenty” and “House of Earth”, respectively. 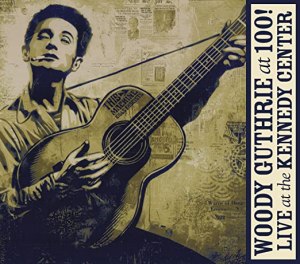