From the outside, country music is for the downtrodden and depressed, with studies demonstrating it nurtures a greater suicide rate, so it’s no coincidence that Americana/alt-country’s greatest specialist magazine is called “No Depression”, partly named after Uncle Tupelo’s album of the same name. A particularly dark friend reminds me from time to time that the starting point, the modus operandi, for most people is “down in the dumps – we’re all depressed, right”? I think he may be pulling my leg. Bruce Robison & Kelly Willis’ Our Year is not depressing however. Whilst it has all that’s needed to hit that country sweet spot (if that’s what you need or are looking for), it’s endearing sense of humour keeps it away from the maudlin.

Let’s drop the surnames. Bruce and Kelly are two well respected Austin musicians joined together not just for this album (and previous release Cheater’s Game), but also as a unit in holy matrimony. This in itself has the potential to take them into the world of beloved singing country couples Johnny and June/George and Tammy/Waylon and Jessi (and we should double-check why the dude is always named first in a post-feminist world). There’s also of course John (Prine) and Iris (Dement), but they managed to escape tying the knot somehow. But just because two musicians are hitched does not mean that they are suitable to make music together. These types of mergers have the possibility of being a train-wreck for all concerned. You can easily imagine that both Bruce and Kelly are strong, wilful individuals, and a push-me-pull-you outcome could result.

Indeed on their website, Kelly has written an article entitled “how to sock it to your husband in the 21st century”, describing how they avoided working with each other for many years because they are very different people. She goes on to recount the origins of her performance of “Harper Valley PTA” (which is on this record) as a way of out-doing her husband’s impressive instant recall of songs – through the use of Twitter, she cleverly arranged for someone in the audience to request the song, which she then went on to perform “spontaneously” in front of her husband (having rehearsed it for several days before). That’s the nature of a fierce competitive spirit. I’d suggest in this case it also has the effect of raising the bar (to use a horrible corporate phrase) so that Our Year is one smasher of an album.

The record is not strictly a full duet album but a collaborative one; sometimes Bruce takes the lead vocal, sometimes it’s Kelly, and sometimes there’s harmonies added by one for the other. There are also lots of covers, such as the aforementioned “Harper Valley PTA”, which here is a wonderful quirky blast of humorous sunshine. It’s worth buying the album for this track alone, but there is a lot more to enjoy. The playing and overall performances are tremendous – the blend of voices in “Departing Louisiana” masterfully evokes a couple re-considering their options, and having two voices on the romping “Lonely for You” emphasises the subject matter. Similarly, the delicate relationship in “A Hangin’ On” is enhanced by the dual harmony.

Overall the tone is on the swampier, grittier side; Walter Hyatt’s “Motor City Man” is interpreted with a cool, laid-back groove and the twisting counterpoint of “Anywhere But Here” creates the sense of an effortless but rebellious freedom. There’s also the more traditional; “Shake Yourself Loose” is a heartfelt rendition of the T Bone Burnett song with excellent steel guitar, and “I’ll Go to My Grave Loving You” is a fiddling tour-de-force. However for legal reasons, please note we do not advocate fiddling in any shape or form. The title track, a delicate and understated cover of the well-known Zombies song, is simply delightful. With an album like this, Bruce and Kelly would have to suffer a strong dose of bad luck for this not to be their year, but if you’re proclaiming your own destiny, who needs stupid old luck anyway? 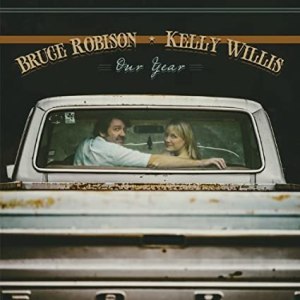