Josh Rouse: The Embers of Time

American singer-songwriter Josh Rouse’s 1998 debut Dressed Up Like Nebraska, a stark and monochrome album, was critically adored, and up until 2006, it appeared he could do no wrong. His move to Spain however was cast as a change in his music, which headed towards easy listening. Rouse seemed to have found happiness, and certain critics grumbled that this meant there was less edge or tension as a result, as if Rouse was spending all his time sitting on a Spanish beach in the sun, eating churros. Those critics, failing to see that Rouse’s music had always, to a certain extent, been relatively chilled-out (as compared to Slayer, for example), may have misjudged the situation because many of his albums since 2006 have been quite excellent. Yes, El Turista included songs sung in Spanish, but as PopMatters pointed out at the time, it had an inspired Cuban influence.

The Embers of Time starts gently with “Some Days I’m Golden All Night”, classily orchestrated with some masterfully understated singing by Rouse. It’s quietly enigmatic, as Rouse (or the character in the song) admits he’s a changeable person, “leaning heavy” on luck, money and ambition. With a “countrypolitan” feel, Glen Campbell comes to mind. If the approach is too relaxed for some, then “Too Many Things On My Mind” almost addresses this. There’s a sudden burst of dramatic Phil Spector’ish drums in the middle of the song, and Rouse details the perils of a busy modern life, suggesting as an alternative we should turn off the TV and stay offline.

“New Young” wears its Neil Young influence proudly in the title, and is firm in its appreciation of records like Harvest. In true self-depreciatory style, Rouse admits at the end of the song that he’ll never be as good as Young, but some Rouse fans will surely disagree. “You Walked Through The Door” is romantic in its reconsideration of life through a realisation that the path of our lives can be changed by people we meet by chance. “Time” continues the idea that we are barely in control of our own destinies; it tells us who to love and where to go. An insistent mandolin part suggests there is no escape.

Overall, this is an album which wrestles with change and impermanence, and it’s an introspective, self-questioning work, without anticipating any answers. In “Pheasant Feather”, a quirky duet with Jessie Baylin, Rouse asks himself whether he is a hunter or a fox, and wishes someone would tell him what to be. In another artist’s hands, this type of existential pondering could seem too abstract, but here Rouse just seems naturally philosophical. The two voices blend well together, and the introduction of another singer does add more texture. For those yearning for the early days, “Coat For A Pillow” may be the closest song in tone to Dressed Up Like Nebraska, with use of modern but melancholic echo.

“JR Worried Blues” is reminiscent of Paul Simon’s solo work, a moderate shuffle trying to beat off modern anxieties. It’s immediately followed by another “blues”, this time “Ex-Pat Blues”, railing at a lack of movement and being stuck somewhere the singer does not want to be. It’s fairly downbeat to say the least, but the string arrangement saves the track from being totally morose. Thankfully, the more cheery “Crystal Falls” comes along with plonky ‘60s piano and enthusiastic backing vocals. By looking back at history, the song emphasises that everything is temporary.

At under 35 minutes, and with a light tone, it could be argued that Rouse is underperforming. However, the high standard of songs ensures that this is not the case, and there’s even a hint of some production experimentation with samples at the start of a couple of the tracks. Many of the cuts seem effortless, but it would be foolish to assume this record was casually put together. The slick gloss is more an indication of good production and an artist with experience; the cohesiveness of content and detailed arrangements suggest a quietly determined approach.

The official video for “Some Days I’m Golden All Night” points us toward the ‘70s era of singer-songwriters like Dylan, and Rouse does have a lot in common with this bunch — a tendency towards pleasing pop hooks, a focus on the music before celebrity, and a clear desire for longevity. Still, despite the comparisons, there’s no one quite like Rouse. The critics may long for drama and scandal, but The Embers of Time often demonstrates that a simple life could be for the best. Here, it certainly makes for enjoyable listening. 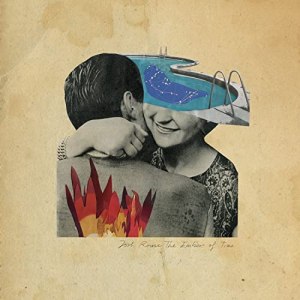