Bob Dylan and the Band’s Basement Tapes comes with a heavy rock history. Numerous books have been written on the subject, taking the music into the realms of archaeology, with Greil Marcus’ Invisible Republic/The Old, Weird America and Sid Griffin’s Million Dollar Bash as required reading on the syllabus. A brief summary of the facts, or something like the facts: Dylan fell off a motorbike in ’66 and for a year or so was limited to pottering around his house in Woodstock. Robbie Robertson lived nearby in West Saugerties, as did most of the Band, then known as the Hawks. Their wives sensibly banished them to the basement to do something constructive like carpentry or metalwork. Instead they recorded a bunch of songs, then moved on to other projects. But no one would let them forget. The recordings spawned the first rock bootleg in July 1969, Great White Wonder. Eventually an official release came out in 1975, although it was a compiled version and did little to keep further bootlegs of additional material appearing over the years, as fans obsessed over the recordings and this period in Dylan’s life.

The recent release of the Basement Tapes Complete is part of Dylan’s continuing series of “official” bootlegs, but back in ‘75 Dylan left it to Robbie Robertson and the Band to chose which songs to release. The Band also added overdubs and recorded additional songs, which did not go down well with Dylanologists. But Bobby D. had moved on (again). Blood on the Tracks was released the same month, a commercial and critical hit.

Two weeks after the release of The Basement Tapes Complete and here comes The New Basement Tapes: Lost on the River, a project produced by T Bone Burnett, officially approved by Dylan, and apparently suggested by Dylan’s publisher when a box of handwritten lyrics dating back to The Basement Tapes era were found. To a cynic, all of this may seem a little self-referential. You could easily argue that The Basement Tapes was simply some mucking around, the “sessions” increasingly over-intellectualized with the passage of time, and this project is a wayward extension of this.

As a comparison, Lost on the River can be considered next to the Mermaid Avenue records by Wilco and Billy Bragg, where Woody Guthrie’s lyrics were set to new music. However when this was made, Guthrie (Dylan’s early role model) had been dead some time, and thankfully, at the time of writing, Dylan’s still alive. If a defense is needed to what could be considered, perhaps uncharitably, as an album in premature testament to Dylan, the man himself would have been unlikely to return to lyrics he wrote over 40 years ago. Although it’s possible his 2011 work on The Lost Notebooks of Hank Williams warmed him up to this overall concept, the idea of Dylan re-visiting these earlier fragments of discarded work is something like one of the Monty Pythons finding half a ham sandwich on the stairs from last year: interesting, but not particularly appetizing, although in other hands it could become a fine spam fritter.

Indeed the original Basement Tapes have been so widely written about and revered that you have to wonder whether anyone attempting a project like this is setting themselves up for artistic failure; it seems likely that re-creating the old, weird America would be a difficult, murky business. Whilst the original Basement Tapes were charmingly low-fi, at times muddy and unclear as a result of the particular recording circumstances, it would be perverse to purposefully record “new” material in such poor conditions in order to try and catch the same ramshackle spirit. Fortunately this approach wasn’t taken, but somewhat ironically there is a “deluxe” edition of Lost on the River which has an additional five songs (reviewed here, the standard version effectively has one song less per artist). And in similar nature to the original Basement Tapes, there are also variations on songs “Lost on the River”, “Hidee Hidee Ho” and “Liberty Street” (recast as “Six Months in Kansas City (Liberty Street)”).

Regardless of any preconceptions or misgivings, the team put together by T Bone Burnett have done an admirable job. According to the producer, each artist — Elvis Costello, Rhiannon Giddens (Carolina Chocolate Drops), Taylor Goldsmith (Dawes), Jim James (My Morning Jacket) and Marcus Mumford (Mumford & Sons) — was chosen based on their talent and collaborative style, as well as their interest as “musical archaeologists”. They were each sent 16 lyrics ahead of time and they then later assembled at Capitol Studios in March of this year. Some arrived with only a couple of melodies and some with a dozen. Despite this, the songs are split fairly evenly, with a pattern emerging from the sequencing on the double vinyl edition, each side usually starting with a song by James, followed by Costello, Mumford, Giddens and then Goldsmith.

The result is a disparate, mysterious collection of music tied together through a common set of musicians, in a similar way to the original. The Jim James opener, “Down on the Bottom”, is one of the closest in tone to The Basement Tapes with a deep, dirge-like quality appropriate for a loser’s lament. On first listen it’s grim, on repeated listens it’s great. Despite the difference in recording conditions, James immediately succeeds in setting a scratchy, analogue ambiance through the resonant echo of some fierce, grungy guitar. As for James’ other tracks, “Nothing to It” rolls idiosyncratically with some interesting instrumentation, and “Quick Like a Flash” has a hip, streetwise sensibility. “Hidee Hidee Ho #11” starts off sounding like an anguished Costello vocal — perhaps influenced by having Costello alongside in the studio — and ends as a light jazz shuffle.

Burnett’s choice of artists is interesting because they each have their own distinctively recognizable styles (James and Costello in particular). It would perhaps be foolish to try and judge the merits of the project on whether the artists manage to find “new” voices, as this would be an almost impossible task at this stage of the game. Overall the artists do seem stretched by taking someone else’s lyrics. Costello adds music to the more obscure lyrics of “Married to My Hack”, “Golden Tom – Silver Judas” is a break-up song full of regret with some great group harmonies, and “Lost on the River #12” has a charismatic vocal reminiscent of Costello’s early work.

Goldsmith steps up for “Liberty Street”, an empathetic take on depression-era hard times with some beautiful gospel-tinged backing vocals added by the ensemble. He also contributes the melodically sunny “Florida Key”, “Card Shark” –with a stunning vocal — and the laid-back “Diamond Ring”. Mumford’s “solo” contributions are the Celtic-rock fuse “Stranger” and “The Whistle Is Blowing”, probably the closest song to having an obvious Band influence.

Most songs are solely credited to the guest artist and Bob Dylan, although there are a few co-writes. Mumford and Goldsmith put forward “Kansas City”, dramatic and sweeping in its forlorn disappointment, and “When I Get My Hands on You”, a furtive and jumpy standout. Giddens has the fewest solo songs, but probably adds the most in backing vocals. Her own contributions are “Spanish Mary” and “Duncan and Jimmy”, both veering towards backwoods folk. She also puts a different, haunting spin (compared to Costello’s version) on “Lost on the River #20”, this time written with Marcus Mumford.

Ultimately the high concept behind this project means listeners may be respectively scandalized or enthused by the very idea. However there’s no doubt that The New Basement Tapes: Lost on the River is an interesting experiment, and there’s certainly lots of good music contained on the album. Dylan’s lyrics overall are interesting enough to merit the work undertaken; Kansas is frequently referenced (perhaps Dylan was thinking about Beat hero Neal Cassady) and Dylan’s lateral sense of humor is particularly evident on “Card Shark”. Costello, James and Goldsmith are possibly the top performers, but all the artists put in solid work, and there is some great ensemble playing, just like the Band. It’s sometimes difficult to tell who’s playing and singing, again just like the Band.

Over 40 tracks were recorded for the project, so it may be that a volume two is released at some point. A behind the scenes documentary directed by Sam Jones on the making of the album is scheduled for air on November 21, surely recommended viewing. 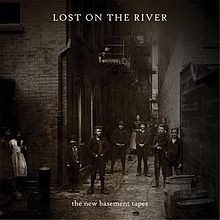