Don’t hassel the Hoff, but in 2020 – according to the International Federation of the Phonographic Industry – Germany was the fourth largest music market in the world (after USA, Japan, and the UK). In that year German singer songwriter Joy Denalane’s fifth album, and her second English language album, Let Yourself Be Loved sold over 26,000 copies and streamed over ten million times, reaching number five in the German charts. With such impressive stats, it’s a sensible move to now release the album in Blighty (the UK) – this release comes in the form of an expanded deluxe edition, with five additional tracks.

Denalane was signed to legendary Motown Records for Let Yourself Be Loved, and her intention was to make a “classic soul album”, seeking inspiration from the music of the late ‘60s and early ‘70s. She certainly achieved this, and the critics agreed; Pop Magazine said the album reflected Motown’s historical greats, including Aretha Franklin and Marvin Gaye, in a harmonious mix of “retro soul”, and the record demonstrated the “sheer talent of someone who can create pure emotion with no language barrier”. Rolling Stone in Germany gave the album four stars, saying it reached “beyond pastiche”.

Aretha and Marvin often excelled in their duets with others, and Let Yourself Be Loved has two memorable collaborations: “Be Here In The Morning”, a smooth duet with Texan blues singer C.S. Armstrong, and the melodic “I Believe”, featuring BJ The Chicago Kid. The recognition of these greats continues elsewhere on the album; the backing and production of “The Ride” is reminiscent of Gaye, and “I Gotta Know” recalls Aretha at her most defiant. Produced by Roberto Di Gioia, a renowned jazz pianist, the album has a coherently classic sound – the self-assertive groove of “Stand”; the feather light “Hey Dreamer”, and the sweet vocal of “Wounded Love”.

Denalane has a great voice, and the songs ensure it can be put to good effect: her vocal soars on “Top Of My Love”, and delivers warmth on singalong “Love Your Love” and the sultry “Let Yourself Be Loved”. “Put In Work” combines both ballad and high energy strut, a showcase for a great performer.

There are five extra tracks on this deluxe edition: the breezy “Still It Ain’t You”, neo-soul “The Show”, and the gentle groove of “Forever”. Standouts are “Use Me”, a Stevie Wonder like funk, and the classy ballad “Give and Take”.

This deluxe version is available as a 7″ vinyl box set (which includes a picture disc), on 2CD or download. 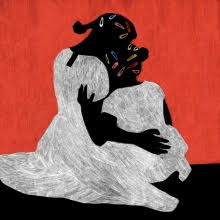