We live in a world where to be understated is to be underrated or misunderstood, subtlety reserved for the metropolitan liberal elite and European arthouse films. Despite this, understated American singer-songwriter Josh Rouse is rightfully appreciated for having released exceptional albums since 1998. Q Magazine called Rouse’s 2002 album Under Cold Blue Stars “quietly thrilling”; The Guardian suggested, in respect of his 2003 album 1972, that Rouse has evolved “his own version of singer-songwriter-soul”; PopMatters commented in relation to 2015’s The Embers of Time that “…there’s no one quite like Rouse. The critics may long for drama and scandal, but The Embers of Time often demonstrates that a simple life could be for the best. Here, it certainly makes for enjoyable listening”.

Going Places is Rouse’s thirteenth album, and follows 2018’s Love in the Modern Age and 2019’s Christmas album The Holiday Sounds of Josh Rouse. Love in the Modern Age experimented with a new sonic palette, one inspired by everything from 80’s “sophistipop” and late-career Leonard Cohen to British indie rock and New York new wave. The album was not Rouse’s Metal Machine Music, but it certainly pushed artistic limits and surprised regular listeners, to the extent that Uncut Magazine subsequently called Going Places “a felicitous reversion to type, full of mature and nuanced songcraft”.

The inspiration for Going Places was to have a set of new songs to play in a small club run by a couple of his Spanish bandmates. Some of the songs (“Apple of My Eye”, “Waiting on the Blue”, “She’s in L.A”) directly allude to going out, having a drink, staying out all night – a life in society. All ten tracks on the album are under four minutes, with three under three minutes: the songs are concise short stories as suggested by titles like “Henry Miller’s Flat” and “The Lonely Postman”. The characters embrace their own melancholy – as a position of sophistication on “Waiting on the Blue”, almost a celebration of loneliness on “Hollow Moon”. Although “The Lonely Postman” seems to enjoy his employment, elsewhere it’s a curse: the character in the sensitive “Indian Summer” can’t wait to quit, and there may be problems in “There’s Somebody Whose Job It Is”.

The album was recorded and produced in Rouse’s home studio with a select crew of familiar musicians including Cayo Bellveser (bass), Xema Fuertes (percussion), Alfonso Luna (drums), Daniel Tashian (Wurlitzer and vocals), Brad Jones (organ), Jim Hoke (saxophone) and Gary Louris (background vocals). It has a warm delivery and production. “City Dog” and “Henry Miller’s Flat” are smooth AOR, “She’s in L.A” is a gently percussive evocation of laid back Californian life, perhaps en route to Hawaii. The ‘60s soul riff of “Stick Around” and organ whirl of “Apple of My Eye” are enhanced by brass, but Rouse and Going Places remain steadfastly free of unnecessary flash or fuss; as such, it’s difficult not to be impressed by the uncompromising approach and the overriding sense of musical and artistic integrity. 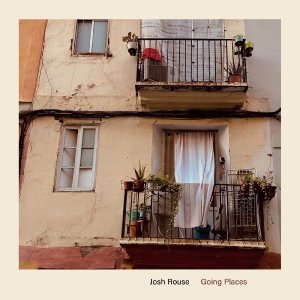