It’s possibly no surprise that Elliott Murphy has been busy of late, but it’s perhaps the form of output which may be out of the ordinary; Murphy is primarily known as an American rock musician who decamped to déshabillé Paris in the ‘80s, continuing to release a steady stream of quality albums year after year. Intime from 2014 and Aquashow Deconstructed from 2015 suggested perhaps that Murphy was taking a slower place by heading into a quieter, more acoustic phase due to the onset of tinnitus, but in fact other projects have ensured continuing visibility; Murphy’s life and times have recently been chronicled in award-winning documentary The Second Act of Elliott Murphy, directed by Jorge Arenillas, “a quiet pleasure” featuring illuminating insight from Billy Joel, Bruce Springsteen and Willie Nile.

Murphy is known as a literary songwriter, the “F.Scott Fitzgerald of rock and roll”, and in the ‘80s he wrote for Rolling Stone magazine, his novel Cold and Electric serialised on its pages. With Murphy’s strong following in Europe, French and Spanish publishers have over the years taken the opportunity to issue a number of Murphy’s books in translated versions. For English/American readers however, the originals remained out of reach.

Murphy has recently focussed on changing this, so that three books are now available in English: these are Marty May, Murphy’s first novel about a down-at-heel ‘70s rock star struggling to make sense of his life, the first in a rock and roll trilogy of novels to include upcoming Tramps and Diamonds By The Yard (the latter co-written with brother Matthew Murphy), Paris Stories, a collection of eleven short stories, and Forty Poems In Forty Nights, Murphy’s first book of poetry.

For followers of Murphy’s music career, Forty Poems In Forty Nights is an easy place to begin because his poetry often recalls some of his song lyrics, taking a direct, modern approach (check out the enjambement of “the suffering” of “summer heartbreaks and endured summer breakdowns I’m addicted to air-conditioning my summers made me the man I am today how can I explain that elocution fails me now” (“Signs of Summer on a TGV”)).

Murphy is very much a touring musician, and there’s a distinct flavour of travel in the collection as a result. Some of the poems date back to the early ‘90s, whereas the material contained in Paris Stories was written, according to the author’s note, “during the last decade of the 20th Century – the nineties were nothing if not prolific for me, as if time were running out”. And fine stories they are: “August in Paris” is clever and witty, and several of them (specifically “Curry” and “Saturdays in Les Halles”) may appeal to younger readers – Murphy has a good understanding of what it is to be young. He is skilfully evocative of Corsica in “Exile” and island life in “the Song of the Ile de Ré”, and draws successfully on the differences between French and American culture in “The Dog and the Wolf”. Engaging and entertaining, Paris Stories shows what could have been, or what may still be, a viable alternate career path for this particular “new Dylan”.

Sadly Murphy’s bassist, Laurent Pardo, died in November 2016 but word has it that Murphy is beating on, like that boat against the current; Prodigal Son, his first album of original songs for some time, is due out later in 2017. 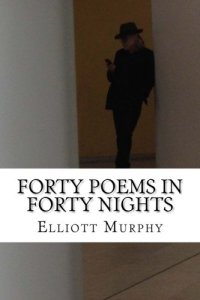