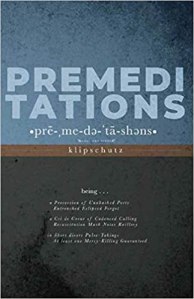 klipschutz, the nom de guerre of Kurt Lipschutz, is a poet, songwriter, editor and occasional literary journalist. As Chuck Prophet’s writing partner, he adds literary flare to some fine rock songs, but he is also well-reputed for his volumes of poetry: The Erection of Scaffolding for the Re-painting of Heaven by the Lowest Bidder (1985), The Good Neighbor Policy (1989), Twilight of the Male Ego (2002), This Drawn & Quartered Moon (2013), and A Visit to the Ranch and other poems (2015). His latest, Premeditations, was recently published by the (delightfully named) Hoot ‘n’ Waddle.

Premeditations is a labyrinth of allusion, with reference to the high and low; as klipschutz humorously points out in his preface – “…if you don’t recognise a name, say, pretend I made it up”. klipschutz does not shy away from being erudite; there are some highbrow references for those who want a challenge (“Italianate Lullaby” invokes Plutarch, Insistius, Principessa, and Cassandra). However, these remain very readable poems; from time-to-time klipschutz experiments with form (for example, in the scripts and fonts of “Extra! Extra!” and “Early Darft”), but this should not deter a newcomer to poetry in fact, this type of limited experimentation may appeal.

The collection is divided into six parts with a centre section, Love & Kisses, being made up of a prose poem and other poems, the most abstract work in the collection. Other sections contain at their end a number of elegies headed up as “2 Cool 2 B 4-Gotten”, a title likely lifted from musician Lucinda Williams.

Fans of counterculture will find the first section, North Beach Threnody, full of recognisable names and places. klipschutz lives in San Francisco and is in his element to lament the passing of a poetic culture. However, that is not to say he is a Beat imitator; despite sitting “in the last bookshop in town” considering Kerouac back to life with “his name on a street sign…voted on by committees of the dead!”, his poetry more resembles Philip Larkin in tone, with the poet sitting on a folding chair as he contemplates “Beyond plate glass/squares of sun surrendered to advancing shade./High ceilings.” (“North Beach Threnody”)

This imagery is reminiscent of Larkin’s “High Windows” and the measured approach takes a threnody from less of a lament, a wailing and gnashing of teeth, to a resigned acceptance that San Francisco has moved on from the glory days of the Beats. This is expertly juxtaposed by klipschutz in “Antipasta A Go-Go” where:

The young kids come around
Armed with ancient envelopes,
Waking up old ghosts on Russia Hill.
Question lists get baptized by good beer.

They sleep it off in live-work spaces
South of Market, where
Misconceptions give breech birth
To cubicles.

In fact klipschutz’s model of the Beat “Poet wild-haired young & raving” (“Collected Works”) is only one part of a wider vision of a world of culture and art; klipschutz may be firmly rooted in North Beach, but his interests and associations go further than the Beat glory days of the 1950s.

More often than not, there is a sense of being in the literary world with many of the poems being about poets (selected name-drops include Walt Whitman, Wallace Stevens, John Keats, Frank O’Hara and Joyce Kilmer) or, the nature of being a poet and poetry itself. Due to its “meta” nature there is a risk that such poetry becomes overly self-regarding, but klipschutz escapes this through his disarming use of humour.

Deprivation was to Larkin what daffodils were to Wordsworth, and in a similar way klipschutz exploits the boho life as a source of darkly comic material, as the poet is besieged by ex-wives, bills and mercenary landlords. The mice of “Nightmare: I’m the last Beatnik at the Caffè Trieste – and I Rhyme” are blamed on the poet’s precarious lifestyle. The weak sun shines on a dejected poet in Rockports “beset by editors and landlords without faces” in “The Unknown Lyrist’s Easter Sunday Sermon To Himself”, ominously set out in National Poetry Month.

Literary fame and fortune appear fleeting, quickly changing from having the world on a (Sinatra) string, with the attendant “nude and nubile sweet young thing/laughing on your lap” to a woman throwing a full can of beer at the writer’s head, missing by inches (“All the Damn Time Screaming in the Rain”). Indeed, klipschutz is unflinchingly aware that poetry may be seen as “small beer” in a hostile world (“Words of Wystan”).

But who else better to write about the literary world with a sense of purpose than the poet? As “Dr Know” points out, “the poetry professor has a name for everything”; klipschutz immerses the reader in this world through use of the technical. The poem “Alfred Fowler (Kayo) Saxton”, for example, incorporates the page numbers of a biography to ensure the reader is deep in the minutiae of its pages. The sibilant language of the racy “Liaison Littoral” pushes the “reams” and “scribbles” of publishing into the sexual:

into the publisher’s assistant

which scribbles on
frisson-inducing thighs
as she ambulates

Premeditations’ focus on literature means there is less of a pre-occupation with politics and rock and roll compared to klipschutz’s previous outing, This Drawn & Quartered Moon. However when these subjects appear, it is with memorable success. There is a tough portrait of Dick Cheney in “Cheney”. “Montreal by Moonlight” suggests that listening to Leonard Cohen records may avert self-harm, and “Dylan at the Wheel” artfully describes the experience of looking at a photograph of Bob Dylan for the first time. The staccato rhythm of the poem emphasises the unlikely setting of a hipster at the height of his fame sitting in a family car with a (possibly pregnant) wife.

As for being a poet, “Autumnal” may well present klipschutz’s statement of intent. Poetry physically falls on top of the poet like a lover and is “cruel as any enemy”; some poems “resemble recipes” and “a gift that no one wants”. This is all well and good, but klipschutz delivers a bleak killer blow – “poems, like lives, can veer off course”. This may in fact be an ambition as well as a warning because klipschutz revels in dejected romanticism.

Proof of the pudding is “Poem for Roberto Bolaňo, Boscoe and Me”, in which the poet, the poet’s cat and the author Bolaňo are all linked by disease of some sort, with the cat’s ignorance of his “late-stage cardiomyopathy”. The poet states that in place of disease he would much rather have Bolaňo’s passport and his Latin American literary life “drifting, roaming, feuding, starting movements, ending others”. And when it comes to life and death, it’s not a matter of living forever in glory like the Gallagher brothers; instead his cat “blinks” to the poet that neither of them will ever die. Expressed as a negative, klipschutz finds his own immortality.