Will Burns has an impressive list of poetic achievements; he was named as one of the four Faber & Faber New Poets for 2014 (along with Rachel Allen, Declan Ryan and Zaffar Kunial) with his debut pamphlet, praised in The Guardian for its “minimalist, emotionally sparse yet precise lyrics”; pamphlets for Clutag Press and Rough Trade Books followed in 2016 and 2019 respectively, and also in 2019, a collaboration with the composer Hannah Peel, Chalk Hill Blue,  which set a number of his poems to her music. Burns is poet-in-residence for online magazine Caught by the River. It’s perhaps therefore surprising that Country Music, published by Offord Road Books in 2020 and shortlisted for the Laurel Prize, is his first collection.

There’s a risk that potential readers may be put off by the title County Music if they assume this is a poetry collection focussed on a genre of music that doesn’t appeal to them. However although County Music may from time to time allude to loved or lost music and musicians, the poems themselves are not confined to that subject, or indeed that genre of music (American jazz trumpeter and vocalist Chet Baker appears in “Photograph of Chet Baker”); instead music, and the countryside, are the backdrop for poems about friendship, family, the seasons, travel and the weather (a particularly British interest), nature, animals (fish, dogs, goats, lizards, ladybirds, maybugs, butterflies) and a nest full of birds – buzzards, hawks, gulls, geese, gannets, parakeets, jackdaws, pelicans, turkey vultures, woodcocks, woodpeckers, owls, garden birds, birds of prey, seabirds.

For those of us looking on in admiration at American culture, there’s a familiar feeling of longing and regret throughout the collection; the suburban ennui of “Thirteen”, with “train stations of middle England/with their ‘parkway’ epithets,/…Almost Nothing to see” is only barely tolerable thanks to a certain harmony on an old song (we assume from Big Star’s Thirteen, going from the title). The poet’s drive south listening to country music, in the poem of the same name, is muted by the poet’s wish that “it was a whole/continent we had to travel into,/with drives that last/whole days to get to the water”. The poet’s friend in “Cycnus in Soho” is elevated by a likeness to a “Californian anti-hero”, with London being “an old, central clot”. International, multi-cultural relations are alluring in “My Grandmother Arrives in the Home Counties”, but the poet has to keep his trap shut (likely because of Brexit) “when the talk turns/to Europe”. Then in “America Ground”, back home there are “drowned towns” and the poet wonders “what can I offer/her here, in her own country”.

The musicians of Country Music tend to be on the whole cult heroes. Lowell is considered for a baby’s name (“a dad taking aim with his record collection” thanks to Little Feat’s ill-fated Lowell George) in “Thanks. I’ll Eat it Here” (also the name of Lowell George’s 1979 solo album). Townes Van Zandt’s last show at London’s now defunct Borderline is recalled in “Kindness, I Suppose” (its title taken from the Townes Van Zandt song “Pancho and Lefty”). Americana band Calexico (along with a couple of Coronas and Lowry) are thrown in to a life of “letters, poems, fragments” in “A Chinese Restaurant Called Happiness”. “Okie from Muskogee” is on the jukebox and Merle Haggard inescapable “in the town that marijuana built” in “Hasher County”. American musician Jason Molina is finely evoked in his “last handful of months in the country” in “The World’s First Ghost”:

There were some agitated phone calls
(lots of Warren Zevon talk),
some scotched plans to meet up.
A gig or two, a couple of daytime beers.

America looms large, a foreign land of suspicious cowboys in “Brown Trout in Zion”, the land of the “nothing-for-free” in “The World’s First Ghost”, but the poems also travel to other far-flung (and not so flung) locations: France (“Fish Market in Normandy”, “Belleville”) Jersey (not Springsteen-land, but the Channel Islands – “Grève de Lecq”, “The Grey Headlands”), the tropics (“Hurricane Season”). The title of poem “The Paris-Texas Crossroads” initially puts us in mind of America thanks to the Ry Cooder inspired title (the soundtrack to Wim Wenders’ 1984 film of the same name), then switches us to thinking of France with the poet and his other (who is running from a “salt lick” island life) eating crêpe and drinking Brêton cider with a Texan country singer host “and that friend of his”; later they seem more likely to be in London, walking past “Dirty Dicks” pub, but you have to look out for the clues in the text, and know or find out the references.

Travel is not always seen as a glamorous, exciting experience in these poems. Being hundreds of miles apart in “Wild Service” is a barrier between two people, with the poem finishing in resignation – “I suppose you decided in the end/that it was just too far for you to come”. The quietly dramatic poem “Heavy Weather” combines the ominous doom of a late night coughing fit and “rubber boats in the news/and no borders to heavy weather”. Travel is unexpected and foreign in “My Grandmother Arrives in the Home Counties” with displacement after the war, but the poet finds some hard won silver lining:

Those who suffer movement
see something of the world
at least. Some welcome
or unwelcome or indifferent port.

There’s a sense of quiet restlessness in a few of the poems, expressed with subtle poetic musicality. “The Word for Wood” expresses literary disquiet, the “double sense that things are just/wrong.” The dogs are at the borders, “lapping it up”, in “February”, with the poet’s map on his phone telling him he is a “quarter of an hour from a drink”. “iPhone” provides photographs, “maps that have logged me/onto old locations”, “updated weathers”, “outdated lists”, “clumps of acronymed chatter” as a “code of communal despondence”. “Moth Book” details “leavings that are never quite in peace” and “discussion at dinner about displacements “.

Another key concern for Country Music is the environment. The soil is “suffering its own crisis” in “The Grey Headlands”. The “bloody mess of individuals” and “small bags of dog shit” that litter the hills in “Bastard Service” are in sharp disparity with the Burning Man motto of “leave no trace” going around the poet’s head. Birds are feeding from landfill, and some have “given up entirely” in “For the Birds”. In “A Summer of Seaweed”, birds are dying from hunger, and with “a patch of ocean entirely lost to rust”, “migratory, magnificent” seabirds are born oil-black. In “Cycnus in Soho the seasons are interchangeable, “a pair of badly-plotted twin brothers”. Burns’ poetry enhances a mysterious world, with “buried things below the sand (“The Lost Manor at St Marie”).

The collection is prefaced by a quote from Malcolm Lowry’s poem “Injured Stones” (“Or he may learn that stones themselves may speak/Flintly their language of heartbreak”); these are indeed often melancholic poems, but with a scepticism that the past was any better. “By god they could talk about the past,/as if it were a waste of time to be there when we were”, the poet exclaims in “Fish Market in Normandy”, and “Old meant good, and not necessarily valuable” in “Belleville”. Melancholy does not exclude some moments of high comedy: “Cycnus in Soho” recalls a friend’s larking about in school and “Brown Trout in Zion” evokes the vivid scene of being matched with a too small horse.

There are some particularly affecting poems focussed on family towards the end of Country Music: “Biography” and “A Man Made of Water” are both adept in describing the “strangeness of a new generation” and the difficulties of aging. These ideas fit perfectly into the collection’s overall interest in memory, whether through music (pedal steel takes the poet back to a bar in “Reading Kinky Friedman”) or nature (the dogs in “The Word for Wood” have “innate memories of the pack”).

Burns was named as one of The Observer’s Top 10 Debut Novelists of 2021 with his debut novel, The Paper Lantern (published by Weidenfeld & Nicholson). Hopefully this will not mean he abandons poetry, as County Music is a memorable and distinctive debut. 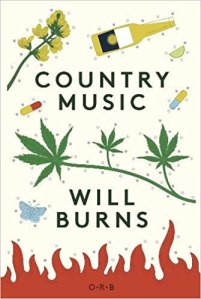