If you want to catch rain, you use a bucket;
a bigger bucket, you catch more rain.
The same can be said for telescopes, which catch light:
the larger the lens, the more light it catches,
so astronomers call them ‘light buckets’.

There’s a hole in my bucket, dear Liza, dear Liza,
and the hole is a bright bulb trailing ribbons of gold on the carpet.
You, out in a thunderstorm, catching sparks in your cupped palms,
small suns burning rivers down your arms.

And laughter is simpler, shining from our eyes as pure light.
And a rainstorm at night sets the dry ground on fire. 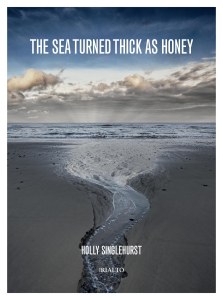 “Light buckets” is from Holly Singlehurst’s 2022 pamphlet “The Sea Turned Thick As Honey” (published by Rialto). It’s a poem which looks up – to rain, to light, to a thunderstorm, and leaves space for the reader to imagine.

The poem starts factually in the first stanza by explaining what a “light bucket” is (a simple, low cost telescope designed by San Francisco astronomer John Dobson in the 1970’s, who is credited with increasing the size of telescopes available to amateur astronomers).

The second stanza launches into the fantastical through reference to a famous children’s song and the striking image of someone “catching sparks in your cupped palms/small suns burning rivers down your arms”.

After the intensity of a thunderstorm, the final two lines of the poem bring the poem to a calm, resolute focus through a personal moment (the “simpler” laughter, the “pure light”) and a poetic statement containing the opposing forces of water and fire.

Holly Singlehurst is a poet who lives and works in London. After graduating with a BA in Music and English Literature from the University of Birmingham, she went on to complete a Master’s in Creative Writing. She was commended in the National Poetry Competition in 2016 for her poem “Hiroshima, 1961”, shortlisted for the Bridport Prize in 2017, and recently won a Pushcart Prize for her poem “On Agate Beach” (Pushcart Prize XLVI, 2022 edition).